This year was my first celebration of Thingyan i.e. Water Festival and Myanmar New Year. The festival is a Buddhist celebration, so there are Buddhist elements to fully celebrate the New Year. People will provide offerings of coconut, bananas, water, and other items to monks and Buddha images.

There were stages throughout the city where performers and DJs blast music through speakers that can be heard blocks away. The stages were set up right against the street and had water hoses that were sprayed at open back trucks and pedestrians passing through. Only a few stages were set up to allow for a crowd to gather and enjoy the music. I visited the main stage at City Hall a few times over the water festival. There were sprinklers over head that would spray water on everyone. 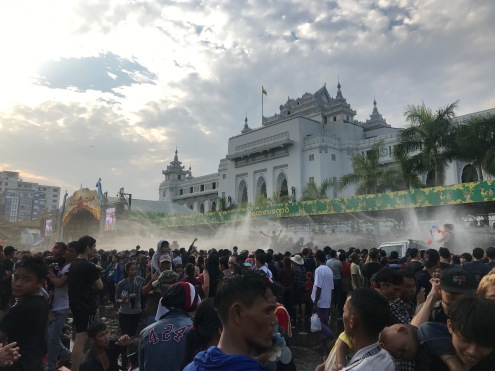 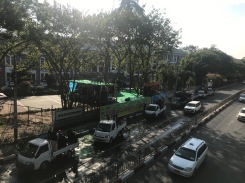 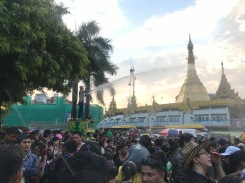 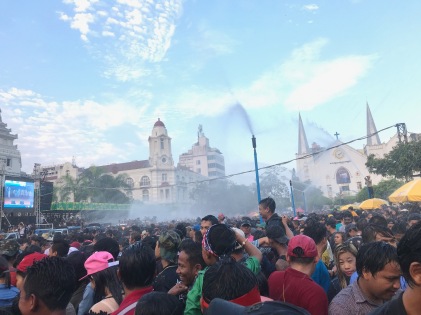 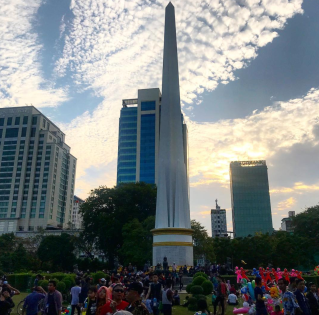 I also went to the opening ceremony at the City Hall. The Mayor of Yangon gave a quick speech before groups of people from different ethnic groups performed traditional dances in traditional garb for the gathered crowd. After these dances, famous actresses and children danced and sang on stage. My friends and I then went down a side street that was blocked off from traffic. The street had a sprinkler system overhead and people with buckets of water waiting to splash people walking by. So, we got soaked from the sprinklers and people dumping water on us. I was a common target of water splashing because I was the only foreigner to be walking through this street so early in the morning. My photo even made it on the BBC Burmese Facebook page! 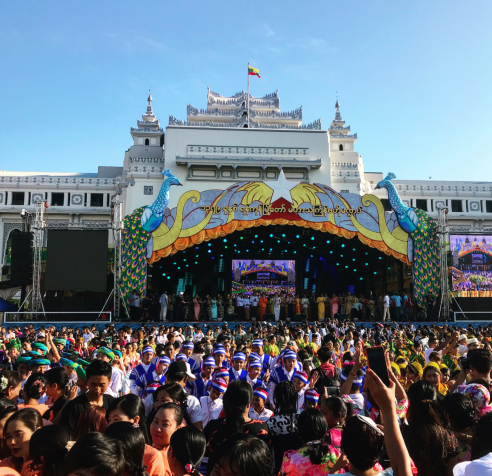 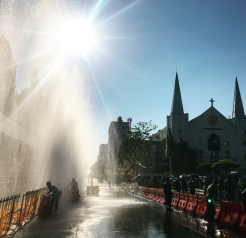 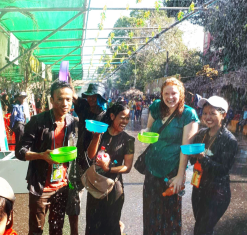 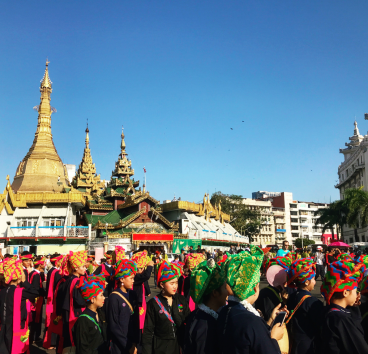 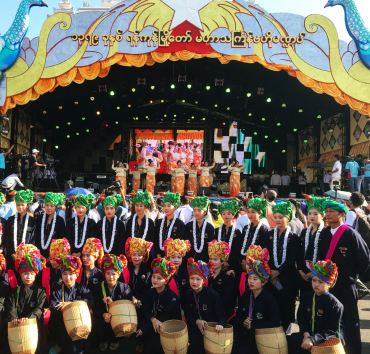 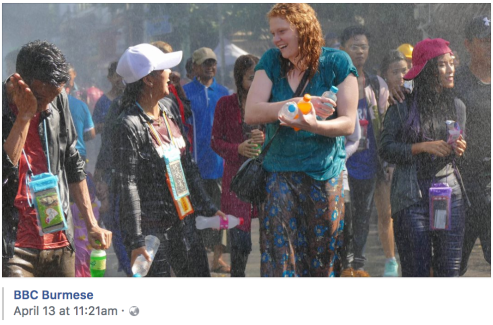 In the evening on the first day of Thingyan, I went to Inya Lake to celebrate. I got to see the “floating” umbrellas that are set up along a path near the lake. We also walked along the streets and danced to the music from each stage as we past by with people spraying water at us with hoses. The hoses of water are so powerful that I couldn’t see for most of the time because water was being sprayed right at my face, even when I turned away from the stage! 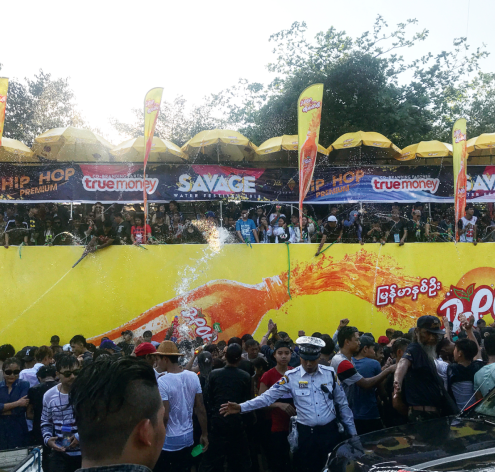 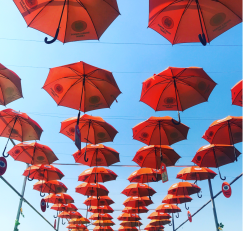 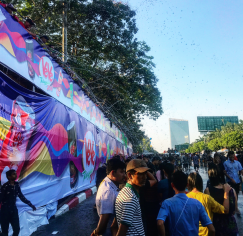 On the last day of Thingyan, the city put on a Splash Walk. The walk took place in Kandawgyi park and attracted a ton of people. We walked through the park with the massive crowds trying to find water refill stations to refill our measly squirt guns. A lot of people had massive super soakers, so I was usually under matched in squirt gun fights. The walk had four stages representing different eras in Myanmar’s history: Bagan, Konbaung, Colonial, and Contemporary. There were dancers and musicians performing songs and dances appropriate to the eras. We also got to enjoy some of the sticky rice balls with jaggery and coconut shavings that are a traditional snack of Thingyan. People dressed in Bagan and Konbaung clothing were carrying silver Buddhist bowls and splashing water on people using sprigs, as is the traditional method. They also had Thanakha, which is a ground bark paste that you put on your face. It has a myriad of purposes: makeup, sunscreen, antibacterial, acne solution, etc. 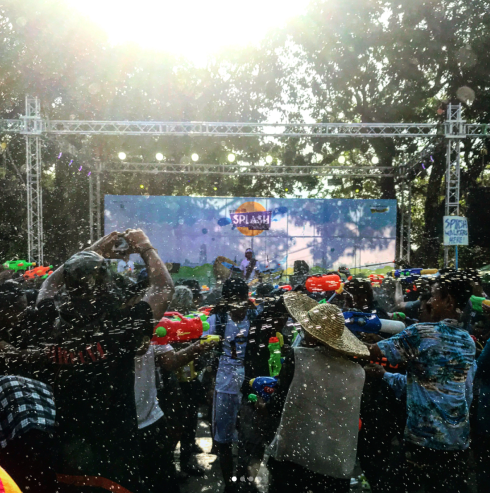 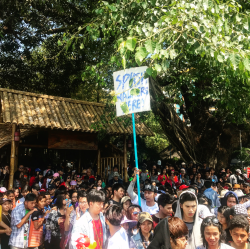 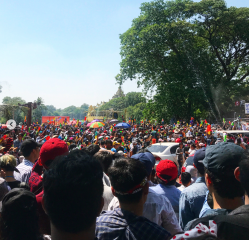 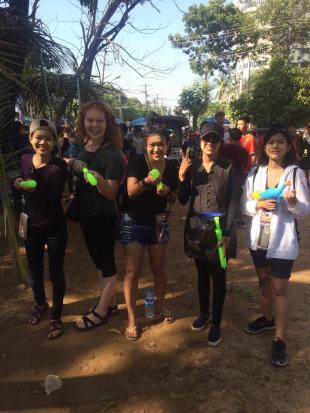 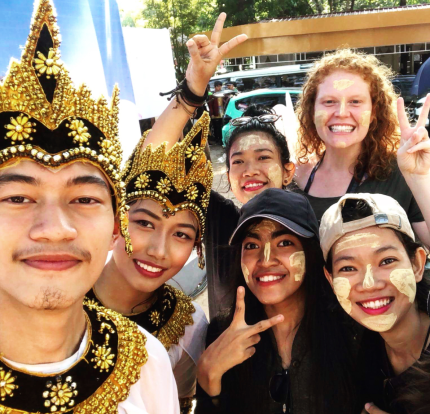 After the four days of celebration, it is New Years Day. Buddhists pay respect to their elders and go to pagodas and pray and offer items to Buddha. Shwedagon Pagoda is a very popular place for people to worship on New Years Day. People also make donations to monks and people celebrating by putting food outside on the streets.

Overall, the holiday was a crazy celebration! It was four days of being soaked, enjoying music, spending time with friends, and reveling in the crowds. It was incredibly how everyone on the streets was celebrating from old people to children. There was the unspoken agreement that it was okay to splash anyone with water and have a smile while doing it. I truly felt a sense of unity and understanding with the people around me. 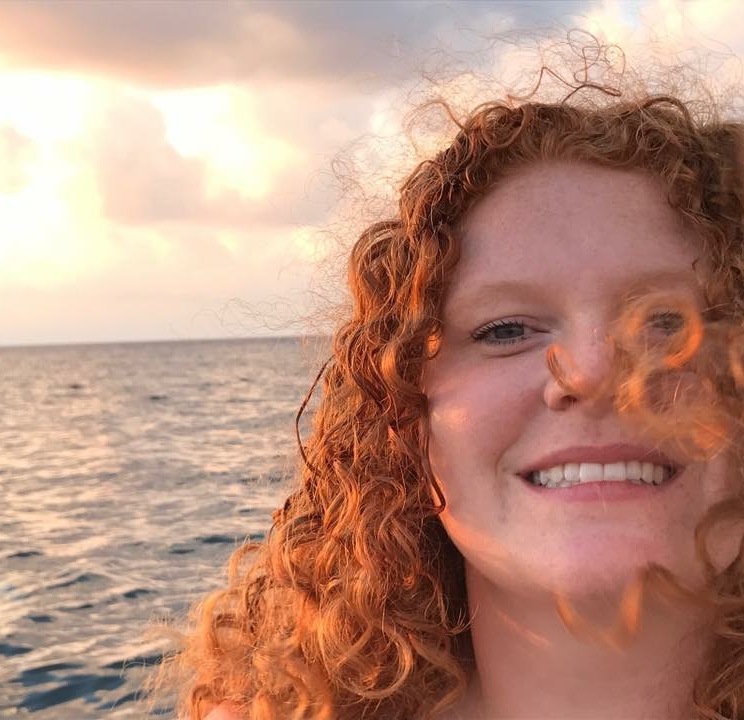