Hpa An is a town in Kayin State. It has a pretty laid back vibe, located right along a river and surrounded by mountains and a ubiquitous haze. There’s caves lined with buddhas and plenty of pagodas to explore.

I arrived at Hpa An at 2:30am from Yangon and failed to book a hostel for the night. I walked to multiple hostels and hotels waking up the staff to see if any rooms were available. Everywhere told me that they were booked, although I figure this was just because they didn’t want to deal with me. So I was homeless for the night. I visited two pagodas and found a bench outside of the Golden Sky Hotel where I laid for most of the night. At 5am, I started to daze off. By 5:30am, I awoke to the sound of the door opening as the owner of the hotel was staring down at me. I pretended that I needed a hotel room, but knew that the hotel was more expensive than the cheap hostel, Soe Brother’s that I had booked for that night.

I also had a phone call with a professor at 7am that I made from a noisy tea shop with poor data signal. The rest of my trip in Hpa An went much smoother! (Other than my bus to leave being delayed by 2 hours)

You can climb up Mount Zwegabin. The path is mostly steep stairs made of concrete, so it’s more of a climb than a hike. At the top of the mountain, there’s a pagoda and viewpoint areas. We started our climb at 9:30am (although had meant to start at 7:30am) from the entrance at Lumbini Gardens. This was a wildly dumb decision because by 9:30am, the heat and sun were starting to increase and the Lumbini Gardens side of the mountain is where the sun shines. The climb up the mountain took us less than an hour and a half, and it was not the most fun of experiences. I was drenched in sweat and pretty exhausted from the climb. At the top of the mountain, there’s a little shop selling some snacks and water and soda. I bought a Sprite and bottle of water in an attempt to reenergize and clench my thirst.

The pagoda at the top is on the smaller side, but it’s astounding that all the materials were carried up to the mountain top. I struggle to walk up there on my own, let alone carrying chunks of concrete. There’s also a little seating area with views of Hpa An where we sat to gather the strength for our descent down the mountain. The way down was shaded and took way less time. 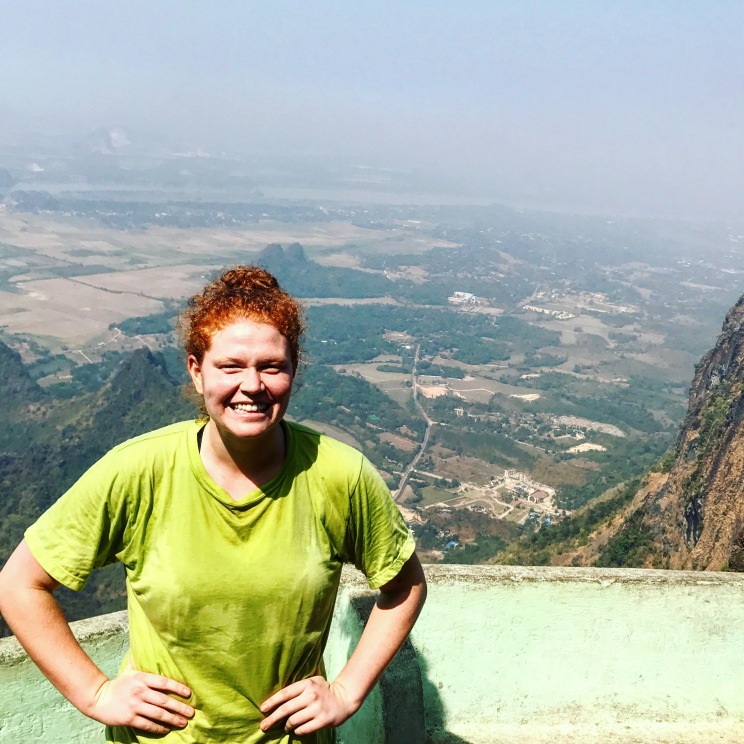 We went to the bat cave at around 5pm. At 5:30pm, people begin banging on the cave to awake the bats and make them leave the cave. We were sitting near a small pagoda overlooking the water. When the bats start to leave the cave, they don’t leave in a massive swarm, but rather a somewhat orderly line. The line moves as if it were one organism, and when the people bang on the cave, the hole line of bats expands kind of like a heart beat. 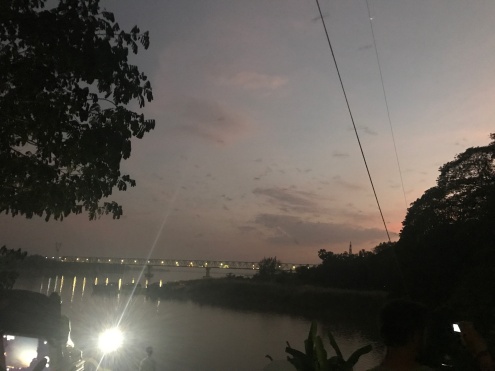 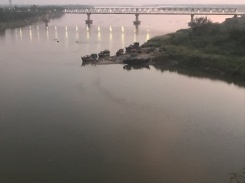 This cave is actually massive. It’s not incredibly long, but very wide. There’s a bunch of buddhas at the beginning of the cave, and on the opposite side of the cave, you can take a boat ride (1,500 kyat for foreigners) back to the road. 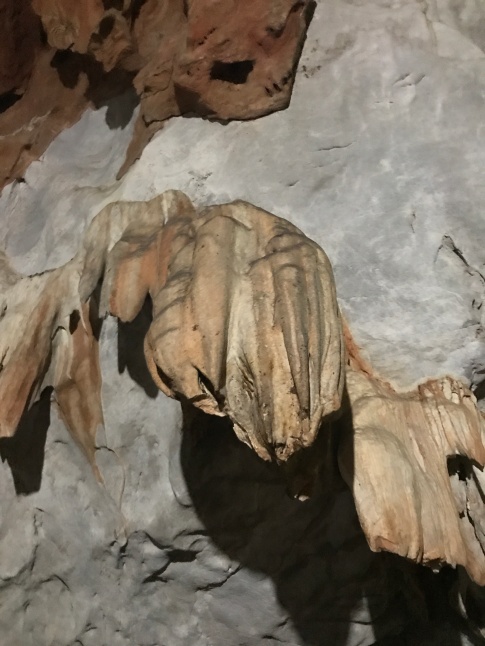 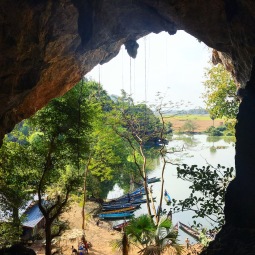 The cave is lined with tiny buddha carvings done in the 7th century and large buddha statues below the carvings. Here, I got bombarded by Burmese people wanting to take photos with me and of me. I had to say enough (pi bi) at one point. Even a group of monks wanted to take a photo with us.

Near the entrance of the cave, there’s a ton of monkeys that are clearly well fed by the tourists. Walking through the mass of monkeys, there’s a staircase leading to the top of a hill. At the hilltop, there’s a tiny pagoda and views of the surrounding farmland. 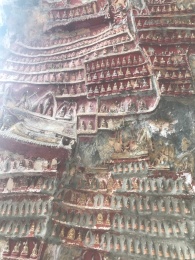 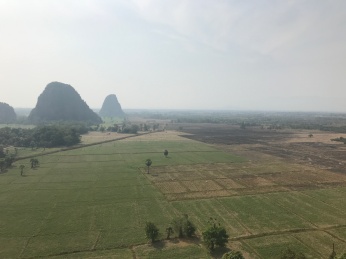 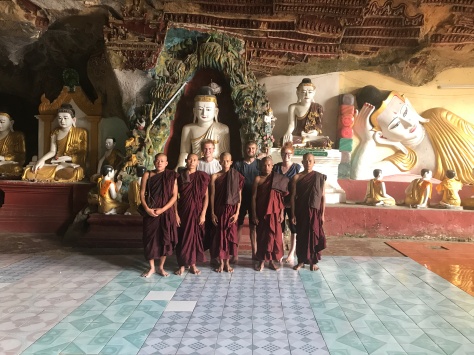 This tiny pagoda is located on a precariously positioned rock. There is a man-made lake surrounding the pagoda, and there’s beautiful views of the mountains. 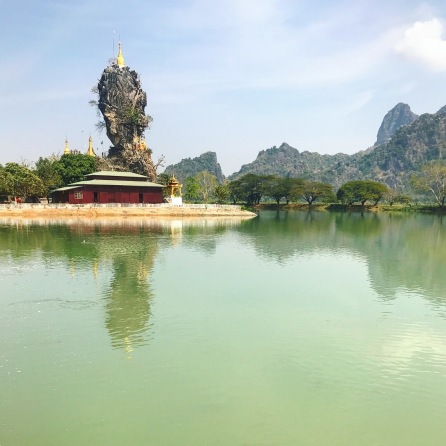 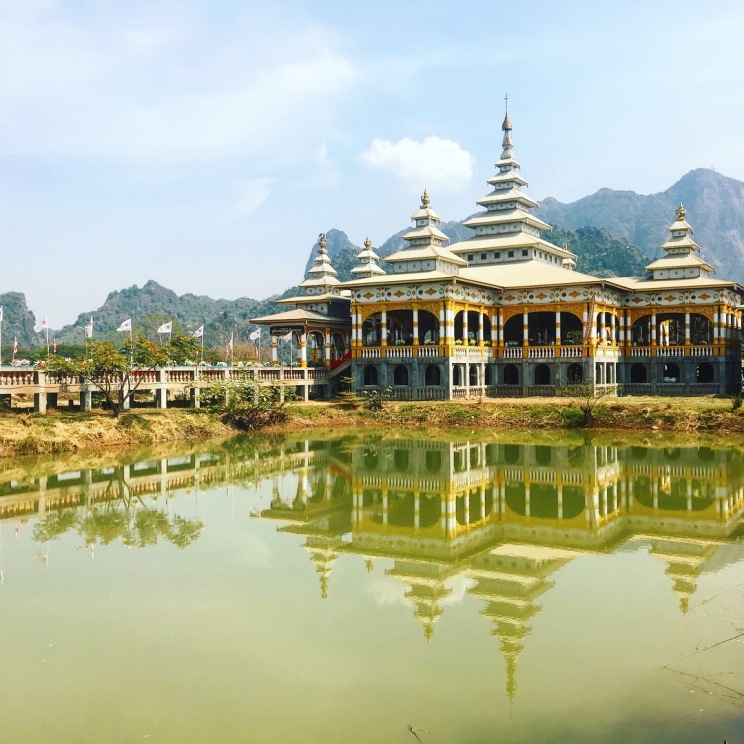 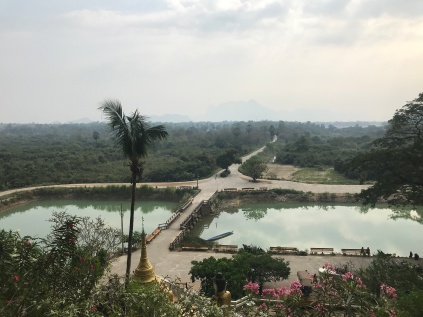 Outside of the cave is a picturesque line of monks waiting to get alms. The cave itself has buddha statues and a tiny entrance to a shrine type area. You can to crawl to get to the shrine, which was a little fun. 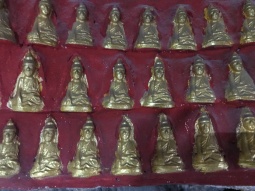 These “gardens” are hundreds of sitting buddha statues lined very orderly near the entrance to climb Mount Zwegabin. It costs 4,000 kyat to enter the gardens.

The night market has a ton of food stands ranging from Asian BBQ, Burmese street food, and ice cream. 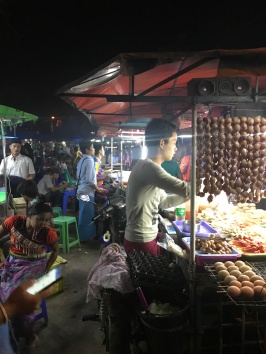 The morning market is surprisingly large with all kinds of stands, but the streets are lined with vendors selling produce. 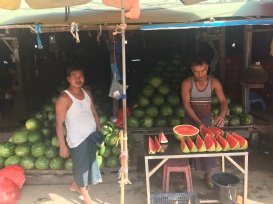 This is a restaurant located north of the clocktower and right across from the “bus station.” It has Burmese Indian food, and I ate here 3 times during my 2.5 day stay in Hpa An. They have delicious naan and bean curry and morning rice for breakfast. 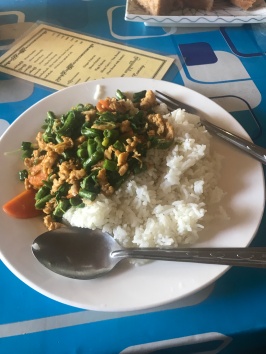 Lucky is basically the only “bar” type place in Hpa An. I went here both nights I was in the town because they have Myanmar beer on tape for 800 kyat and the Black Shield Myanmar Stout on tap for 1,600 kyat. It seems like the place everyone goes to for some beer, which is great after a day of exploring caves and mountains.